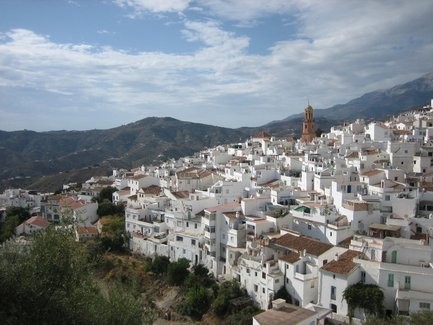 La Axarquía is a district in the Eastern part of Málaga province. It’s the one with a higher number of villages and because of its geographical situation enjoys beautiful sights both in the coast and in the mountains.

Many of the villages of this district are quite attractive for tourism as they have kept nearly intact the beauty of their traditional streets, squares and hidden corners. These typical ‘Andalusian white villages’ are part of the heritage coming from the historic Arabic presence in the area.

There is a fantastic route along the coast to enjoy the small villages that used to live from fishing and have become important tourist resorts but without losing their traditional appearance.

Starting from Nerja, in the furthest East, you can enjoy the fantastic sights of Paraje Natural (natural site) de los Acantilados de Maro, the ‘balcón de Europa’ in the city centre or its famous natural cave, where music concerts and dance performances take place. After Nerja, you are going to drive through the villages of Torrox and Algarrobo, before reaching the bigger town in the district: Vélez-Málaga, and its seaside borough Torre del Mar. Following the Sun to the West we’ll reach Rincón de la Victoria close already to the capital of the province: Málaga.

There are also very interesting routes hinterland, around the small villages in the mountains and among them and the ones in the coast.