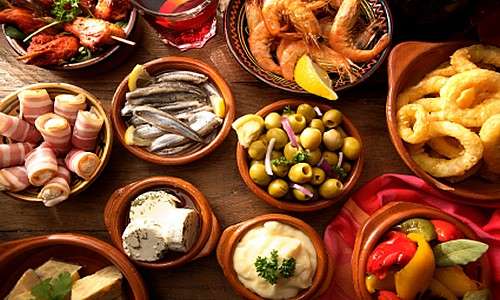 Malaga's culinary richness never ceases to amaze, and choice is aplenty when thinking about where to eat on the Costa del Sol. For many, the eating and drinking of a holiday in Spain is the best part. From "pescaito" (fried fish), salty gambas (unpeeled king prawns) and home-made summery gazpacho (cold, tomato based soup), food on the Costa del Sol is as fresh and tasty as it gets in Spain.

Most Malaga restaurants focus on popular Spanish cuisine in all its original glory, while others serve up modern twists of classics to offer something new and exciting. The very best Malaga restaurants serve up the best of both worlds - traditional dishes and avant-garde concoctions - to spectacular effect. Thankfully, these are high in number.

Typical tapas bars serve beer - almost always the Malagueña brand 'Victoria'- and sweet, local wines (Moscatel is the most famous) with small dishes of traditional or innovative foods. "Picoteo" (nibbling) thoroughly enjoyed in Spain, thus, the explosion of the tapas scene on the Costa del Sol and other parts of Spain.

There are various theories offered as to the origin of the "tapeo" tradition, but it is almost certain that it began in the nineteenth century, when small servings of food - olives, cheese, ham or bread - were used to cover drinks as a hygiene measure. These simple drink lids (literally, "tapas" in Spanish) have evolved into original, exciting bites of intense flavours. Gorky and La Rebana are typical tapas bars in Malaga City centre, where you can be assured of top quality bar-snacking. However, if you're looking for the most traditional tapas bars in Malaga then try El Pimpi - whose walls show countless photos of celebrities who've dined there, and whose casks feature their autographs. Antonio Banderas, Lola Flores and La Duquesa de Alba are among the most famous examples. Alternatively, Quitapenas serves mainly fish and offers an excellent sweet wine called "Lagrima Dorada." Or there is La Campana, where visitors spill out onto the street while drinking its traditional "Pedrete" wine.

But culinary genius doesn't only feature in restaurants. Most Malagueñas will probably tell you that the best cuisine in Malaga is lovingly home-cooked "en casa", by mothers, grandmothers and even great grandmothers. Indeed, it is these women who are the true champions of Spanish cuisine. Take it from Spaniards themselves, who would make you think they were willing to fight to the death if the supremacy of their mother's Tortilla Española were momentarily questioned.

A few classic examples of favourite traditional dishes in Malaga are "Gazpachuelo", a creamy, fish, bread, garlic and egg based soup. This is actually one of the best known and probably consumed more than any other dish in a typical Malaga home. Originally prepared by sailors in winter, it has evolved into many different versions. The "via AB" soup, for instance, adds hake, prawns, clams, and a trickle of amontillado.

However, the king of Malaga cuisine is perhaps the most basic dish of the lot: "migas", neither a soup nor a stew but a fried breadcrumb based dish mixed with meat and vegetables. The most common meat ingredients are pork and chorizo, but, like just about any traditional Malaga dish, it often varies according to taste. When "morcilla" (similar to black pudding), peppers and pork loin are used, it's called "plato de los montes". "Ventas", that is, family-run inns on the back roads across the province or in villages, are the best place to try "migas" or "plato de los montes."

Seafood is ever-present on the dining tables of Malaga. It's served in restaurants, beachside bars or "chiringuitos," and those small, secluded taverns where the sea breeze pervades everything. Try a prawn or sardine skewer in one of the terrace-bars in La Carihuela, La Misericordia, Estepona, Los Boliches or Guadalmina. No holiday in Malaga would be complete without trying out the local fare, and doing as Malagueños do.

Or, if you're looking for car hire to get to Malaga, check out Espacar's latest rental deals.