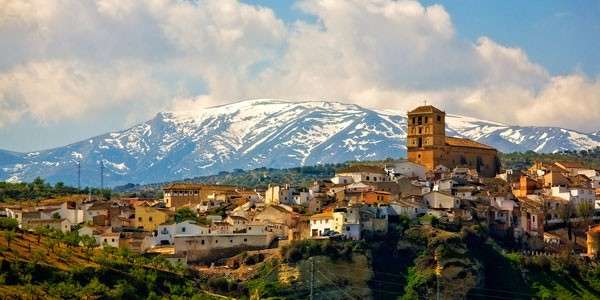 Thinking about doing a driving tour around Southern Spain and looking for places to visit? Then look no further than our guides to the best towns in Andalucia. We're passionate about our clients seeing more of our beautiful country and we hope our guide will help with your plans to discover more of the area.

1. The most beautiful towns in Andalucia - Ronda, Malaga

Situated to the west of Malaga, Ronda boasts an exquisite bridge over a gorge which allows for incredible views. The town has its origins in the 6th century but there is little evidence of this now, and the Ronda that is present today is one of Roman foundations. It's a very popular town to visit because of its historic sites, with the New Bridge over the gorge being one of the most iconic shots of inland Andalucia.

Two must-see sights are the Palace of Mondragon (also known as the Palace of the Marquis of Villasierra), and the Bullring, which is also home to the Bullfighting Museum.

2. The most beautiful towns in Andalucia - Antequera, Malaga

Antequera is just 30 minutes' drive north from Malaga city centre. It's a stately town with a forgotten, dusty feel about it but it's also very grand in its own right. Arguably less touristy than Ronda, Antequera still has plenty to visit: the highlights are the Alcazaba fortress and the magnificent Colegiata de Santa Maria la Mayor Church at the top of the town behind the Alcazaba's fortified walls. If you buy a ticket into the Alcazaba the Church is included in the price.

Vejer de la Frontera is undoubtedly one of the most beautiful towns in Andalucia. Clinging to a rocky outcrop with incredible sunsets and impeccably white-washed houses, it's the perfect place to stay for a few days. There are four main archways or gateways still intact in Vejer de la Frontera; in fact, arches over roads and passageways are somewhat a theme of the town. The Plaza de España or 'Plaza de los Pescaitos' is the centre of the town where there are plenty of restaurants to choose from with terraces overlooking an ornate fountain from the 1920s. The church in Vejer is a mix of two style - Visigothic and Mudejar - and its minaret has been turned into a bell tower as is the case with most old mosques in Andalucia. It's worth mentioning that although Vejer is inland it is only 10km from the nearest beach at Barbate.
Arcos de la Frontera, Cadiz

Arcos de la Frontera has the most spectacular sunsets, as it sits high on a limestone rock. The most impressive monument in town is the castle, El Castillo de los Arcos. Within the original walls, the oldest part of the village is full of narrow roads, cobbled streets and white arches. It's a town of two parts: one part being the oldest historic centre and the other being largely early 20th-century townhouses.

4. The most beautiful towns in Andalucia - Carmona, Seville

The towns surrounding Seville are quite different to similar-sized towns in Malaga, Granada or Cadiz provinces. Places like Osuna, Ecija and Carmona are the most noteworthy and show the clear wealth Seville enjoyed throughout its history as a major trade city. This prosperity filtered out into towns like Carmona, where large, grand houses and fine municipal buildings were constructed, and therefore it makes for an interesting visit. The main site to see in the town (other than simply enjoying the tapas bars around Plaza de San Fernando) is the Roman Necropolis.

5. The most beautiful towns in Andalucia - Alhama de Granada, Granada

Alhama de Granada is much smaller than the towns mentioned above, but it's still well worth putting on a road trip itinerary. It's an unpretentious old spa town perched on a gorge with a few simple bars. One of the highlights of a visit is a lovely walk from the centre of town down to the bottom of the gorge (where there are abandoned flour mills to explore), up through the oldest part of the town (where animals and people still live as neighbours) and back into Plaza de Constitucion in the heart of the Old Town. Just outside the town there is a spa and natural hot springs in a river which is a real treat come spring, summer and early autumn.

Looking for more ideas for where to go in southern Spain on your driving tour? See our selection of the best cities in Andalucia and beautiful white villages.