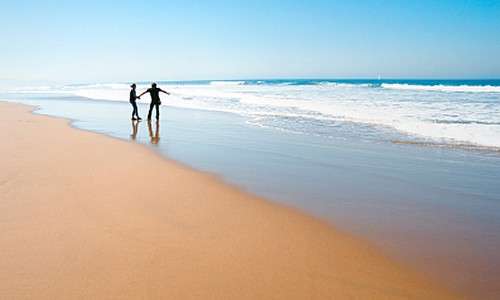 The 161 kilometres of sandy beaches in Malaga are the best letter of introduction the province can show to locals and foreigners alike. It's true that the diversity of the landscape just off the coast which is perfect for active tourism and the towns and villages in Malaga province have led to cultural travel which have given the area a boost in the last few years, but the beaches in Malaga have been, and will always be, a popular holiday choice. Malaga beaches make up the majority of well-known Coast del Sol and here’s our list of some of the best of the bunch...

The sun rises in the easternmost coast of Malaga, over the wildest, most rugged beaches in the province. The coast of Nerja has kept the rough character of Granada's seashore, and the Maro cliffs shelter the best-known beaches in the area. These quiet coves have been designated a Protected Natural Space to conserve them environmentally and can easily be reached via the dual carriageway.

Cala del Cañuelo, on the east coast of Malaga, is one of the best places to spend a day on the beach. It's a pebble beach with crystal-blue water and a great diving location.

In Nerja itself, there are some of the more secluded beaches in Malaga Province, surrounded by rocks and bathed by crystal-clear water. Maro and Molino de Papel lie in an entirely natural setting, where tourists can dive and sunbathe in a relaxing atmosphere; Las Alberquillas and Burriana, closer to more densely-populated areas, offer a greater number of amenities and easier access.

West of Nerja but still east of Malaga also features equally delightful beaches in Torrox, Algarrobo, Velez-Malaga/Torre del Mar and Rincon de la Victoria. When visitors get closer to large towns, they'll find better infrastructure and services on the beaches. In Rincon de la Victoria, for example, there's a long stretch of beach that is very popular with local residents, since they can find a wide variety of services there. Benajarafe and Torre del Mar are fine beaches too which attract largely Spanish visitors during the summer months.

In Malaga City, Misericordia and San Andres have been turned into two of the more accessible beaches on the Costa del Sol. They're flanked by one of the most elegant areas in town: the new west seaside promenade. These shallow-water, fine-sand beaches are ideal for sea bathing, as there's practically no swell. Eating the typical deep-fried fish ("pescaito") at the beach bars or "chiringuitos," as they are called in Spanish, can be a perfect rest bite from the sun. In the summer, people get together to watch films on the beach in free screenings.

Malagueta beach, in downtown Malaga, is the most famous and popular of Malaga city beaches. This easily reached beach has been awarded a Blue Flag and, like all the beaches in Malaga City, it features disabled facilities, lifeguard services, and toilets. Just like Baños del Carmen or El Palo, is affords great views of the city skyline at dusk and plenty of restaurants.

Visitors can head westward to Torremolinos, Benalmadena, Mijas or Fuengirola, whose beaches offer all kinds of leisure and eating options. Beaches like El Bajondillo, La Carihuela, Bil Bil or Los Boliches are wide and close to towns. They are very popular with tourists thanks to their amenities and proximity to the seaside promenade, by the residential area. They feature plenty of restaurants, bars and "chiringuitos" where tourists can taste the typical food of Malaga, including all manner of fish. Nearby and easy-to-reach beaches are Las Yucas and Las Viborillas, these areless packed in the summer because they're wilder and not that close to urban centres.

Heading west along the Costa del Sol, you'll reach Marbella, Puerto Banus, Estepona, Casares and Manilva and their beaches. Playa Bella, Bahia Dorada or La Galera represent the typical Mediterranean beaches in the natural landscape of Sierra Bermeja. Anybody can be sure they'll have the best of sun and sand for their family holidays in Spain. Tourists coming here go to beaches like Cabopino, Guadalmina, Los Monteros, Nagüeles or Puerto Banus, since they're close to gorgeous beachfront properties, are easy to reach and feature all the amenities and services beach-goers can ask for, like beach clubs, beach loungers, bars, toilets, showers and lifeguard services.

Finally, some good places to watch the sunset on the Malaga coastline are Las Arenas or Los Toros, in Manilva. From east to west, and always beneath the sun, visitors can explore a wealth of beach resorts or natural landscapes in their low-cost hire car and surely find the best beach on the Costa del Sol for a family holiday or a romantic road trip.