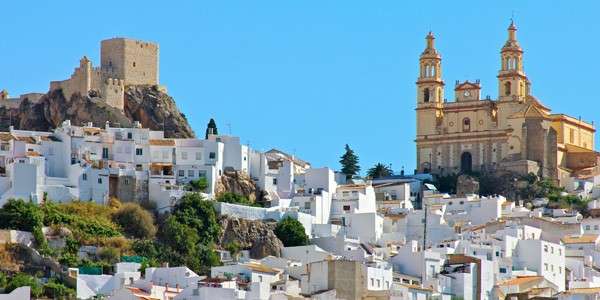 Here's our pick of a few of the best white villages in Andalucia to visit while on a tour in southern Spain.

As well as offering some of the country's best beaches, southern Spain is also home to some jaw-droppingly beautiful mountainous landscapes. In the various mountain ranges in Andalucia are nestled hundreds of picturesque white-washed villages. A great way to see some incredible landscapes but also experience rural culture, food and drink is head to either Las Alpujarras in Granada or the Axarquia in Malaga province.

If you're wondering where to go in Spain and have hired a car to go on a tour then several villages of the Alpujarras can be easily visited in one trip. There are well over 30 villages in total and Las Alpujarras are divided into two: La Alpujarra de Granada and La Alpujarra de Almeria. So where to go? Three that stand out to us are Lanjaron, Trevelez and Orgiva. Lanjaron is a spa town and the gateway to the Alpujarras. It's famed for its mineral water, spa treatments and ruined Moorish castle. Orgiva is the largest town of the Alpujarra de Granada and it's located in a valley next to the Guadalfeo River which makes it particularly picturesque. Accommodation, bars, craft shops and restaurants are plentiful in Orgiva. Trevelez is the highest village in mainland Spain and therefore a lot colder than Orgiva. It's famed for its air-dried ham - Jamon Serrano - and tastings go on all round the village. If you're looking for an active holiday, then Trevelez is a great place to start a hike into the Sierra Nevada National Park.

This other cluster of villages are east of Malaga and easy to access. There are 56 villages that form the Axarquia, some in the mountains, others on the coast. The capital of the area is Velez Malaga which is a working town with a fort and several interesting churches. The historic centre is difficult to navigate but head to the Plaza de las Carmelitas and Plaza San Francisco to get a real feel for the town. Next to visit are Nerja and Maro: these two neighbouring towns are quite different from each other; Nerja is the most touristically developed town in the area with plenty of restaurants, hotels and bars for holidaymakers and people on driving tours. It resides beside the sea alongside its neighbour, the much smaller Maro. It is argued that Maro has some of the best beaches east of Malaga and the village itself is home to the Caves of Nerja and a charming village centre. As for a drive into the mountains, Canillas de Aceituno is a very traditional and picturesque white village with three excellent restaurants serving the village's specialities of black pudding (morcilla) and oven-cooked goat (chivo al horno).

Leaving these two areas behind, here are a few more specific villages to add to the list when doing a tour of southern Spain or day trips from the coast

A very pretty village surrounded by almond trees so the blossom make it even more beautiful. It has a good example of a 10th century castle and 17th century church. Just outside the town are some caves. Las Cuevas de las Murcielagos are well worth visiting not only as they have one of the largest bat colonies in Andalucia but tombs were discovered the middle Paleolithic period.

In the south of Cordoba province, Iznajar is spectacular because of its position resting next to its own reservoir. It even has its own sandy beach, which during the summer months is truly a dream come true as the temperatures can hit 40℃ regularly.

Castellar de la Frontera is a village within a castle's walls in Cadiz Province. At the top of a high rocky outcrop, as you can imagine it commands incredible uninterrupted views over the nearby Guadarranque reservoir. The history of the town goes back to the Bronze Age and there are several caves with prehistoric drawings in the area. The village itself is made up of beautiful, whitewashed houses built on fortress walls all nestled together with bougainvillaea cascading over walls. A special place to visit.

Sanlucar de Barrameda is on the coast of Cadiz province – the Costa del Luz. It has a particularly attractive main square and is famous for four things, dry sherry (called Manzanilla), prawns, flamenco and beach horse racing.

Only 9 km from the coast, this village with 12th-century church is picture-postcard perfect. Carares is typically Andalucian and charming without being spoilt by tourism. It was the home of one of the most important figures in southern Spain – Blas Infante Perez de Vargas who was the father of Andalucian nationalism.

Gaucin is famed for its artistic residents, good accommodation and views of Africa. Just a half an hour’s drive from the coast, through the Serrania de Ronda and cork forests, Gaucin is a very picturesque village with ruined castle and incredible views. It really shouldn’t be missed.

With all these villages (and many others like them) when you're on a driving holiday in Spain some of the best moments are simply taking in the villages themselves, enjoying a leisurely drink in a square or getting lost down narrow streets. By taking a moment to stop and observe, you get a real sense of Spain.

Like our pick of best Andalucia white villages, but looking for a more urban flavour to your road trip? see our selection of the best cities in Andalucia.