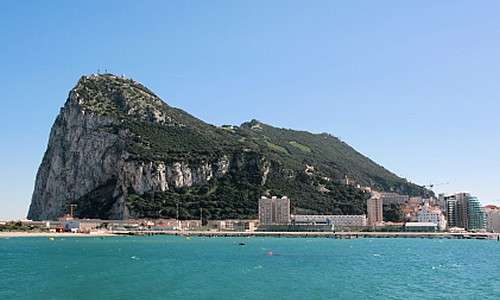 Gibraltar, a vast rock which measures less than six square kilometres in total, is a curious sort of place. Despite its proximity and connection to Spain, the Rock is a British self-governing colony and it's home to a mix of people working and living there including Gibraltarians, Moroccans, Indians, Spanish and British. It is the British influence that is most evident here: crossing over from Spain makes the contrast even more evident, with cobbled streets, English signs and currency, and numerous pubs and fish and chip shops.

Where is Gibraltar exactly? Well, it's a peninsula that juts off southern Spain between the Spanish city of Algeciras and the town La Linea. You can fly, drive, take public transport or walk over the border to Gibraltar. By car or foot you access Gibraltar from the town of La Linea where it is well signposted. There are often vast queues to get to and from Gibraltar as border controls are present. To avoid waiting, cross out of peak rush hours (8.30 - 10.00 and 16.30hrs - 18.00hrs). Another option is you can also get a ferry to Gibraltar from Tarifa or Algeciras, this is about a 40 minute and 20 minute journey respectively if you want to arrive by sea. Gibraltar's ferry port is one mile away from the centre of town. No matter which way you want to arrive at Gibraltar, you must have passports or national identity cards or you will be denied access.

You can park in La Linea (the border town to Gibraltar) and walk across the border into Gibraltar; at certain times this could be the quickest way to cross the border. There are three underground car parks in La Linea, the first is in Plaza de la Constitucion, another in Avenida del Ejercito / Avenida del Mar and finally the closest, Santa Barbara car park between Alcaidesa marina and Avenida Principe de Asturias. All are very close to the border controls of Gibraltar. Once through border controls you can get on one of the very reasonable regular buses that takes you straight into the centre of Gibraltar.

If you have decided to drive across the border than in Gibraltar the car parking options are: ICC car park on Line Wall Road, Grand Parade (by the Cable Car Stations), Queensway and there is some street parking on Line Wall Road, Corral Road, Devils Tower Road and Rosia Road.

What to do in Gibraltar

There is a range of different activities to enjoy in Gibraltar. You can take a tour of the rock, with many specialist tour providers in taxis, by coach or by cable car. The Gibraltar museum highlights the interesting story of the rock since its historic beginnings. For a more artistic experience, the Gibraltar Crystal Glass Factory on Casemates Square gives you the opportunity to see qualified glass blowers, and if you book ahead, you can even create your own vase. Other sights include the Ape Den, St. Michael's Cave, the World War II Tunnels and the Botanical Gardens.

For a more adventurous activity, a spot of diving or whale and dolphin watching might be exactly what you're looking for. Specific trips are organised all around the rock for all levels of experience. Alternatively, activities like windsurfing, yachting, fishing and golf are possible, or you could explore any of the five beaches that Gibraltar has to offer.

In Gibraltar you can enjoy tax free shopping. On this relatively small landmass you can just about buy anything, from cars to jewellery and cosmetics to British food. The currency is the Gibraltar pound, the same as British Sterling, although Euros are accepted everywhere. On or just off Main Street (which leads from Casemates Square) is the high street, which is reminiscent of any British town. You'll see British brands and stores, and several jewellers, perfume and cosmetic shops. Some of the stores are: Marks & Spencer, BHS, Tescos clothing range F&F;, Mothercare, Boux Avenue, Oasis, Next and Monsoon.

There are six beaches in Gibraltar, four of which have sand: Sandy Bay, Eastern Beach, Catalan Bay, and Western Beach. The other two are Camp Bay and Little Bay. Camp Bay is good for children as there is a pool. Both of these sand-less beaches are manmade terraces for sunbathing which lead to the sea.

Catalan Bay has a village-like feel and is probably the most picturesque part of Gibraltar. There is a smattering of buildings built on the edge of the rock painted in pastel colours. The Caleta Hotel is at one end of the beach and the church of Our Lady of Sorrows is also situated here. It's the second largest sandy beach in Gibraltar and has several seafood restaurants.

The largest beach is Eastern Beach, as the name suggests to the east of the rock. It's in the wake of the rock and therefore has sunshine all day long.

Where to Stay in Gibraltar

There are some great choices if you fancy staying over in Gibraltar. Here are three of our favourites:

The newest accommodation in Gibraltar is an impressive luxury yacht hotel. The Sunborn has a pool, spa, casino and restaurant all at five star standard. It's docked in Ocean Village marina with easy access to restaurants and bars.

On the east side of the rock is Caleta Hotel, one of the most ideally situated of the hotels owing to its close proximity to the beach and great views out to sea.

This traditional, established hotel is situated 1km from the centre of town next to the botanical gardens. It was built in 1932 and has hosted many famous names over the years. Stylish interiors, restaurant, pool and fantastic views are part and parcel of staying at the Rock Hotel.

Gibraltar also has its share of vibrant nightlife with plenty of discos, wine bars and pubs to entertain visitors. There is also the International Casino Club, which has spectacular views of the Bay of Gibraltar and Africa. During the summer months, there is usually a wide selection of live entertainment around the beaches and Ocean Village Marina. Another area for pubs and bars is Irish Town which is just off Main street. If and when you go, it's worth checking the Gibraltar Tourist Board's monthly Calendar of Events for an up-to-date guide of what's on in the area.

Getting Married in Gibraltar

Something many visitors to the Rock don't realise is its popularity amongst soon-to-be-weds or couples who wish to renew their vows. As a result, Gibraltar is something of a romantic hotspot. Many people come to Gibraltar to get married - with a couple of the most famous examples being Sean Connery and his bride, and John Lennon and Yoko Ono! With 24-hours' notice and the correct documentation (and a willing partner), you might find yourself leaving Gibraltar with a wedding ring on your finger.

So whether you visit Gibraltar for a day-trip or stay longer to explore it better, you'll see there's plenty of things to do on this big old rock!

Looking for car hire from Gibraltar or La Linea? For more information on the options for car hire at Gibraltar Airport with Espacar, please contact us via e-mail at info@espacar.com or call 952 792 935.